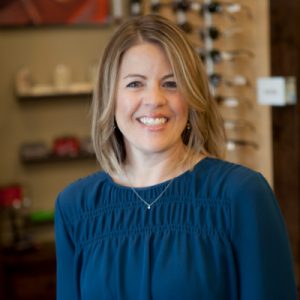 Dr. Sallie Barclay is originally from Brainerd, Minnesota and earned her undergraduate degree in Biology from Gustavus Adolphus College in St. Peter, Minnesota in 1996. While attending the Pacific University College of Optometry in Forest Grove, Oregon, she met her husband, Ian, who is also an optometrist and a native Albertan. She received her doctorate of Optometry in 2000, graduating with distinction.

Her clinical experiences include externships on a Navajo reservation in northern Arizona and an optometry/ophthalmology referral center in Seattle, Washington, as well as an eyecare mission to Costa Rica. Dr. Barclay practiced in Minnesota before moving to Cochrane in 2002. She practiced in Airdrie, Cochrane, and Calgary prior to opening Cochrane Family Vision in 2014.

Dr. Barclay is an active member of the Alberta Association of Optometrists and served on the Alberta College of Optometrists Council from 2008 to 2016, serving as President in 2013-2014. She provides comprehensive optometric care (including the treatment and management of ocular disease and contact lenses) and has a particular interest in pediatric eyecare. Dr. Barclay has two teenage boys, and enjoys many activities including downhill skiing, camping, and spending time with her family.

We are excited to announce that we are now open for routine eye exams and emergency eyecare needs!

We are currently reaching out to any patient that had to be rescheduled due to COVID-19 and are arranging appointments on a priority basis.  Thanks in advance for your patience as we navigate this new normal!  Our goal is to accommodate everyone as quickly as we can while maintaining the safety of our patients, team, and the community of Cochrane.

While we are open again, many things will be quite different.  Following are important items to be aware of:

While things are different, what hasn’t changed is our dedication to providing you with high quality eye care, technology, and products in a friendly, welcoming “Cochrane” way!  Thank you so much for your support - we are very excited to see you!